Tonight I am grateful for sumo.

I saw the email, in August, from a local public radio station.  A list of five things to do this weekend.  Sumo wrestling was on it.  Sumo?  Cool.  Where was it?  Probably far away.  No, Long Beach.  Close by.  Oh-em-gee.

I had just recently decided that I was going to take some chances, seize some opportunities, say yes more.  So I looked it up.  It was scheduled for the Saturday before school started.  But local.  And cheap.

It was sort of like watching the Olympics, on one hand.  You know how it is—you binge-watch enough action and listen to enough commentary and read enough articles to become an armchair expert on the sport.

On another hand, it was like going to any other live major athletic event.  On TV it looks so…official, so glitzy, so pro.  It’s curated glamor.  And then in real life, it’s, like…is that it?  That medals stand that looks so cosmic in photos is just a small platform thingie and it’s, like, right there in the corner.  Weird.  So plain.

Yeah, sumo was kind of like both of those things.  We learned rule details and strategies; we shouted coaching advice from the stands (coaching advice from total newbs who have never wrestled a day in their lives, much less trained for sumo).  We were underwhelmed by the women’s competition, put off by the arrogance and showboaty bravado of one of the Egyptian competitors (dude, this is sumo, not WWE—respect the tradition, man), saddened when the lovable reigning champion lost in the final round.

We Facebooked and tweeted our photo updates.  We enjoyed Japanese beer and better-than-concession-stand Japanese food.  And I secretly reveled in the fact that normally I would be at school right now, in my classroom, trying to get things ready for the new school year.  It felt so illicit!  It was delicious!

After two hard years at school, I was looking for a change—in situation, in attitude, in approach.  And I had been pondering a motto, a saying, an acronym, a touchstone—hunting for a suitable and applicable truth reminder.

I knew WIN was one of them:  What’s Important Now?  That one came from Essentialism, by Craig McKeown, and it resonated from the second I first heard it.  It helped me focus my energies last year, at least a little bit.

I tried out several different sayings that it could represent.  Another friend, Liz, added her suggestions.

Then I arrived at the one, the right one.

My motto for the year, weird as it is:  SUMO WIN.  Shit Unfolding? Move On.  What’s Important Now?

And this works for me.  It reminds me to check myself, to check my reactions, to check my self-talk, to be mindful of my time, to be prayerful, to stay focused on what matters, to rise above the drama, to move away from the stupid.

And so tonight I am grateful for sumo.

And for silly but important sayings.

And for friends who will pick up and go with me to sumo wrestling.

And for friends who giggle when I tell them my new weird sayings, and who understand, and who see that I am finally beginning to understand. 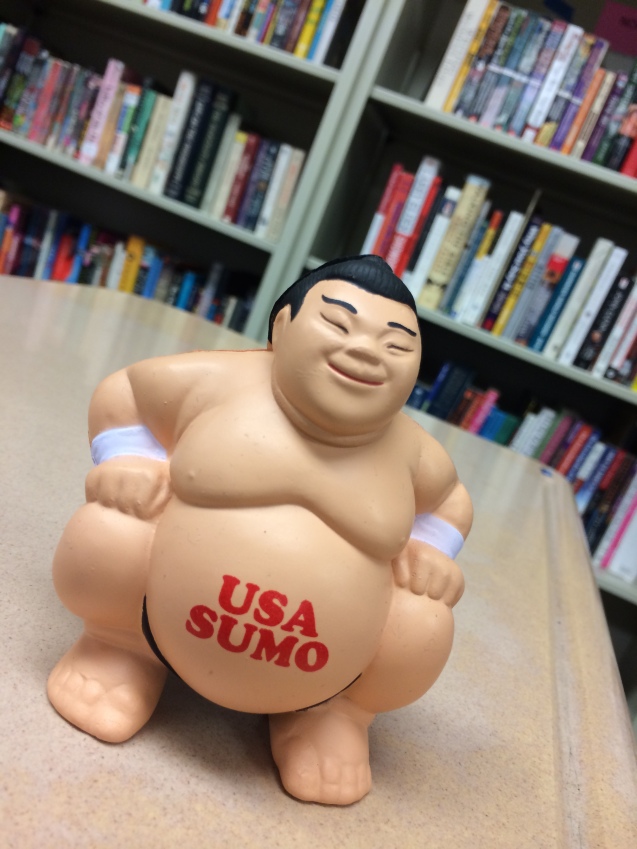