I am grateful tonight for honest voices—for people who are true to their own brains, who speak truth and do it honestly, in the voices they were given, to speak to the audience who needs to hear them.

On Saturday, I went to hear Nadia Bolz-Weber speak at All Saints Church in Pasadena.  In anticipation of this, I downloaded and listened to both of her books on Audible.  The hype about her, of course, is that she’s a “lady pastor” and tatted up and she cusses.  And all of those things are true.  But so, too, is her theology, and so is her interpretation of living out love and truth.

Anyone who rats out her own self through the stories she tells—her leadership model is the “screw it, I’ll go first” approach—and who admits her own effed-up-ness, who concedes her own need for grace, who serves and gives despite owning up to the fact that her feelings often don’t align behind the action, who “preaches to herself and lets us listen”—she is someone I can learn from.

The order of service included her reading from her new book, raffling off a ham and “a bunch of (almost) worthless junk” (including “the worst Christmas ornament ever”—of a smarmy Santa Claus kneeling at the manger; sheet music for “The Little Drummer Boy”—the “worst Christmas carol ever;” a Virgin of Guadalupe belt buckle; and a DVD of The Thief in the Night, the movie that traumatized most kids growing up evangelical during the late 70’s/early 80’s—for the DVD, she elicited a promise from the winner to make deviant protest art out of it)…

In case you were wondering, I am one of those scarred for life by that damned movie!

…and ending with her reading a litany of beautiful beatitudes:

“Blessed are they who have loved enough to know what loss feels like.”

“Blessed are the merciful, for they totally get it.”

“Blessed are those who ‘still aren’t over it yet.’”

“Blessed are they who doubt.  Those who aren’t sure, who can still be surprised.”

“Blessed are they who know there has to be more than this.  Because they are right.”

I’ve had debates lately with friends and fellow writers about the appropriate use of profanity.  Michael Hyatt posted an essay on his blog earlier in 2015 against the use of swearing, in which he suggested that cussing hurts one’s brand and asserted, “If you can’t be interesting without profanity, then let’s face it: you’re not that interesting.”  Perhaps that’s all true.  I’m willing to concede it.

Be that as it may…

An audience member asked Nadia about a time she was confronted by a denomination bureaucrat about the fact that she used swear words in her personal blog.  Her response was, “I had a calling to be a public theologian with a particular voice.”

Maybe we’re not all supposed to have the same audience.  Perhaps having a limited audience isn’t all bad.  I count myself a grateful member of Nadia’s tribe—she resonates, and I can hear the truth when it’s spoken by her, despite (or perhaps because of) the cuss words and badass tats and the whole package.

“It’s our jagged edges that bring us together,” after all. 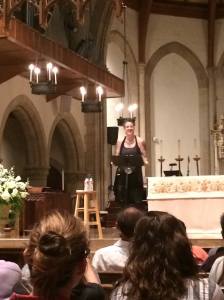 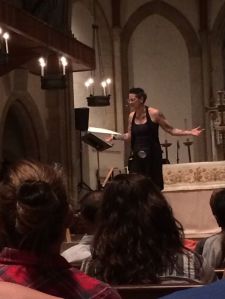